First responders work laborious, dangerous jobs in order to protect American citizens. They are often the first people to encounter threatening situations ranging from violence and terrorist attacks to natural disasters and house fires. Firefighters, police officers, emergency medical technicians, and dispatchers alike endure a lot of stress, anxiety, and trauma due to the nature of their work.

Who is Considered a First Responder?

When faced with emotionally challenging circumstances, first responders are expected to put on a brave face, maintain their composure, and do their job. Unfortunately, these pressures, along with the trauma that comes with the nature of these professions, often lead to drug abuse and addiction.

Many first responders start using drugs and alcohol to alleviate stress and other mental health symptoms that are associated with conditions like depression and post-traumatic stress disorder (PTSD). The U.S. Department of Veterans Affairs reports that 46.4% of people with PTSD also have a substance use disorder (SUD) at some point in their lives. And, extensive studies prove that first responders are at a substantially increased risk of PTSD due to the nature of their work.

First responders often deal with death, loss, violence, crime, and serious injury–all of which can be extremely difficult to cope with and heavy on the psyche.

Many first responders have trouble reconciling their own emotions after traumatic events. Despite all their efforts to help, most first responders have experienced death firsthand, and feel as though there was something else they could have done to save a person’s life. This substantial burden and constant guilt can become too difficult to bear for many, leading to drug and alcohol abuse.

Firefighters and paramedics are the first to arrive at life-threatening scenes like fires, severe injury, and potentially fatal health problems. These individuals are tasked with saving lives–a role that can take a heavy toll.

Approximately 37% of firefighters and 10% of paramedics experience PTSD, increasing the risk of substance use disorder among professionals in this career. The National Survey on Drug Use and Health found that nearly 29% of firefighters abuse alcohol and 10% abuse prescription drugs. 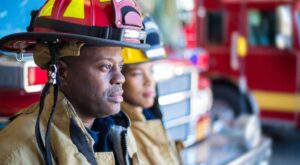 No matter the crime or disaster, dispatchers, police officers, and sheriffs are almost always involved. They often put their own lives on the line to stop violent crime, and they experience a lot of firsthand violence.

Military service members often struggle with PTSD as well as making the adjustment to living back at home after combat. This causes many of them to self-medicate with drugs and alcohol, ultimately leading to an addiction.

Whether a police officer is driving a vehicle while under the influence or a paramedic is providing life-saving care to individuals while intoxicated by drugs, substance abuse among first responders puts the community and first responders themselves at risk.

Sadly, many first responders are hesitant to get treatment. This is because there is a stigma surrounding mental health and substance abuse in the workplace–especially when it comes to workplaces that deal with public safety. People may be afraid of losing their jobs or being disciplined at work. People who hold important positions or titles, such as Marshals or military officers, may be afraid of what the public will think of them.

While fear of losing one’s job is a legitimate concern, there are laws such as the Family and Medical Leave Act (FMLA) and the Americans With Disabilities Act (ADA) that can protect the rights and privacy of first responders seeking addiction treatment. 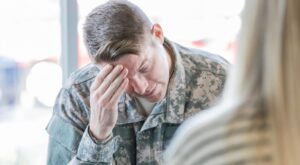 Maintaining optimum mental and physical wellness is an important part of being successful on the job for all first responders. While constant exposure to trauma, life-altering events, and chronic stress can lead to mental health conditions or substance use disorders, dual diagnosis addiction treatment centers can provide first responders with the comprehensive care they need to recover.

Treatment includes the basics, such as medically-assisted detox, group and individual therapy, family counseling, and relapse prevention. However, rehab for first responders also aims to address the unique needs of individuals in these careers. As a result, treatment may include:

Studies show that some of the most effective treatments for first responders struggling with PTSD and addiction include:

Early diagnosis and treatment are key to helping treat PTSD, mental illness, and substance use disorders in first responders. Speak with a compassionate admissions coordinator at Arise Treatment Center today to learn about your treatment options.

Our mission at ARISE Treatment Center is to help individuals overcome addiction-related issues by providing the highest quality of services that lead to physical, mental, and spiritual healing. Through our comprehensive clinical approach to recovery, we will work alongside you to develop a unique treatment plan that is catered to meet your needs. Contact us today to speak with a team member and get started.