According to the National Institute on Alcohol Abuse and Alcoholism, “85.6 percent of people ages 18 and older reported that they drank alcohol at some point in their lifetime.”[1] Out of those individuals, nearly 15 million people meet the criteria for an alcohol use disorder.[1]

Alcohol use disorder is a chronic and progressive condition that causes a significant impact on a person’s ability to function in their daily lives. People who suffer from this illness have a hard time managing how much alcohol they consume and cannot quit using the substance despite facing the consequences of alcohol abuse. Some of the consequences of this condition include physical ailments, legal troubles, dangerous behavior, social isolation, and financial strain.

As a person progresses in the disease of alcoholism, they may experience increasingly dire consequences and side effects of their drinking. Generally, there are four stages of alcoholism each characterized by their own set of problematic alcohol abuse patterns.

When someone begins using alcohol, they usually are only doing so in social situations. Then, they begin to notice that alcohol soothes their uncomfortable emotions. This causes them to begin using alcohol to cope with things in their life that aren’t going well.

After a while, their alcohol use begins to change. Instead of just using it socially, they are beginning to feel like they cannot cope with their life without using the substance. This is how the progression of alcoholism begins.

Once someone is abusing alcohol to cope with their emotions, they are in the beginning stages of psychological dependency. This means that they are becoming dependent on alcohol to solve their emotional, social, and behavioral issues. Some individuals begin self-medicating their problems with alcohol.

After a while, mental dependency becomes accompanied by physical dependency. This happens as someone begins to routinely abuse alcohol. When they attempt to quit or cut back on their alcohol consumption, they will experience symptoms of withdrawal.

Over time, an individual will develop a tolerance to alcohol. This means that they require more and more of the substance to feel an effect. This will cause their alcoholism to progress even further.

What are the Stages of Alcoholism?

Alcoholism is known to have a progressive nature. Problematic drinking follows a common trajectory through stages of worsened drinking patterns. To understand how alcoholism works, it’s important for people to be aware of the stages of alcoholism.

Grasping the stages of alcoholism requires people to understand how alcoholism is diagnosed, as each stage is characterized by a certain number of diagnostic symptoms.

According to the DSM-V, alcohol use disorder is diagnosed when someone displays at least 2 of the following symptoms:[2]

The more symptoms a person experiences, the further their alcoholism has progressed.

The four stages of alcoholism are:

Early alcohol abuse is characterized by social drinking. This stage of alcoholism could present as typical, non-problematic drinking or high-functioning alcoholism. In terms of diagnostic criteria, individuals may display between 0 to 2 of the symptoms of alcohol use disorder. 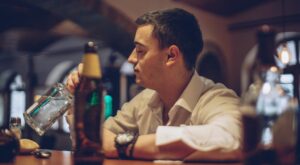 In the early phases of alcohol abuse, a person may experiment with different types of drinking and use alcohol in various forms. This could include binge drinking, social drinking, and trying new kinds of alcohol. Because this stage of drinking is unproblematic, individuals are unable to tell that they have an issue with alcohol.

It is difficult to tell whether someone is in the early alcohol abuse stage. This is because their drinking hasn’t veered very far from the typical social drinking that most individuals partake in.

However, the signs of early alcohol abuse include:

Problematic alcohol abuse, or early-stage alcoholism, is when people begin binge drinking on a regular basis. They may even drink so much that they black out on occasion. This behavior can be described as experimentation with alcohol going too far, especially if an adolescent or a young adult is displaying the signs of problematic alcohol abuse.

In terms of diagnostic criteria, a person may begin to display 3 to 5 symptoms of alcohol use disorder.

Some of the symptoms of this stage of alcoholism may include:

Severe alcoholism begins when an individual is displaying 6 out of the 11 signs of alcohol use disorder. At this stage, the person’s alcoholism may become evident to their family members and friends. While some people can be extremely good at hiding their alcoholism, this stage is severe, meaning a lot of symptoms will be present.

During the stage of severe alcoholism, it is possible for people to be in denial. The disease of alcoholism makes it really easy for people to lie to themselves and believe that there is no issue with their relationship to alcohol. However, they will soon experience physical symptoms associated with their alcohol abuse and begin to understand that they are suffering from a severe alcohol use disorder.

Additionally, individuals in this stage of alcoholism will be physically and mentally dependent on alcohol. This means that when they stop drinking or miss a dosage of alcohol, they will experience symptoms of withdrawal. Withdrawal occurs when someone’s system becomes accustomed to alcohol and then the substance is removed from the system, causing the body to go haywire.

Symptoms of alcohol withdrawal may include:

In end-stage alcoholism, the effects of alcohol addiction will become apparent. Individuals will begin to develop health conditions related to alcohol.

Some of the long-term effects of alcoholism include:

During this stage, drinking alcohol becomes an all-day affair. People may lose their jobs due to drinking during work time, have issues with their family and friends because of their drinking, or suffer a huge financial loss due to their alcohol abuse.

End-stage alcoholism is basically the same thing as hitting rock bottom. “Hitting rock bottom” refers to the point in which a person’s drinking and behavior related to alcohol cannot get any worse, causing them to require professional help to avoid experiencing life-threatening consequences.

In terms of diagnostic criteria, individuals may display 7 or more symptoms of alcohol use disorder. Some people may experience all 11 symptoms of the condition during this stage, making it imperative for them to get professional treatment for alcoholism. 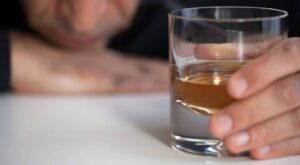 When Should Someone Seek Treatment for Alcoholism?

It is important to note that alcohol abuse can be treated at any stage. While some people believe that a person must hit rock bottom to be successful in treatment, this is a harmful and dangerous myth. It is always better to go to rehab sooner rather than later.

The signs someone should attend treatment for alcoholism include:

People who have a negative relationship with alcohol can get help from an alcohol rehab center at any stage. It is important for individuals to get treatment before they experience the consequences of alcohol use disorder that tend to occur in the severe or end-stage of alcoholism. Otherwise, they could do irreparable damage to their life, mental health, and physical health.

If you or a loved one suffer from problematic drinking, it is important to seek professional help. Alcoholism is a progressive disease and without the help from a rehab program, it will only get worse and more complex to treat.

At ARISE Treatment Center, our multidisciplinary team of addiction professionals is committed to helping you uncover the root cause of your alcoholism so you can recover to lead a healthier, more fulfilling life. Using a variety of alcohol addiction therapies, we help you heal inside and out. Call now to start your recovery.