Understanding the Effects of Substance Abuse and Addiction Among Expectant Mothers

Substance abuse and addiction are dangerous for anyone, but they are especially harmful during pregnancy. Expectant mothers who abuse drugs and alcohol put themselves and their unborn babies at risk.

Unfortunately, addiction is a disease, and people who are at the grips of addiction are often unable to stay sober on their own willpower alone. Mothers struggling with addiction do not want to hurt their babies, but they are fighting a real battle with cravings, urges, impulse control issues, and withdrawal symptoms. Specialized treatment programs that support the unique needs of pregnant women can help expectant mothers get sober and protect their health and their pregnancy.

According to the CDC, a 2022 study found that about 14% of pregnant women reported having at least one alcoholic beverage in the last month. About 40% reported using one or more substances, such as tobacco, marijuana, or opioids, as well.

Not all pregnant women who drink alcohol drink excessively, though. Studies have found that 2.6-5% report binge drinking and 0.4% report heavy drinking during pregnancy. The more alcohol a mother drinks during her pregnancy, the more likely her child is to suffer the consequences. Still, no amount of alcohol is entirely safe during pregnancy.

Pregnant people who experienced frequent mental distress and those who did not have a primary healthcare provider were more likely to report alcohol abuse. 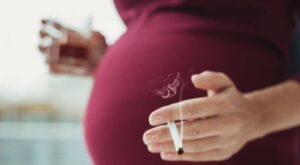 All health issues that result from alcohol exposure before birth are considered fetal alcohol spectrum disorders. FASDs can look different for everyone, and some cases are more extreme than others.

Signs and symptoms of FASDs include:

The CDC determined that 0.2 to 1.5 infants for every 1,000 live births in the United States are born with fetal alcohol syndrome (FAS). Some studies, such as those looking at school-aged children, report even higher estimates, claiming that 6-9 out of every 1,000 children have FAS.

The most commonly abused drugs during pregnancy include:

Expectant mothers who abuse any of these drugs may be more than two times as likely to experience stillbirth than mothers who did not abuse drugs during pregnancy.

If a mother is struggling with addiction and she is physically dependent on the drug she is taking, her baby will be dependent on it, too. As a result, babies who are born to addicted mothers often come out of the womb addicted, themselves. Within the first 72 hours of being born, these babies may experience what is known as neonatal abstinence syndrome (NAS).

Symptoms of NAS include:

NAS symptoms begin within the first 72 hours after birth. The type of substance that was used, the amount of it, and the frequency of the mother’s drug use can impact how long NAS lasts and how severe symptoms become.

Dangers of Substance Abuse While Pregnant

Pregnant women struggling with substance abuse and addiction put their own health and their baby’s health at risk.

Risks for the Mother

Women who abuse drugs and alcohol during pregnancy, whether they are addicted or not, may neglect their health and safety. They are more likely to experience a miscarriage and complications associated with pregnancy such as preeclampsia (high blood pressure and swelling), going into premature labor, or cause gestational hypertension.

Effects on the Child

Prenatal substance abuse can have devastating effects on the fetus or unborn child. Many of these adverse effects stay with the child for a lifetime, while others can be alleviated in acute care.

A few risks associated with substance abuse during pregnancy include:

SIDS describes the sudden and unexplained death of a baby who is younger than one year old. According to the National Institute on Drug Abuse (NIDA), children who are born to mothers who both drank and smoked after the first trimester of pregnancy are twelve times more likely to experience SIDS than children who were only exposed to drugs and alcohol during the first trimester.

What Happens When Babies are Born Addicted to Drugs?

Babies who are born dependent on drugs and alcohol may experience potentially dangerous symptoms of withdrawal as well as physical and developmental disabilities. They may also be at an increased risk for health problems later in life.

Immediately after birth, doctors and nurses will assess the baby’s health and identify any symptoms of NAS or other complications. They will stabilize the baby, if needed, and provide supportive treatment. Treatment may involve:

Most babies recovering from NAS will recover in 5-30 days. Once the baby shows significant improvement, he or she can go home but should continue going to all follow-up and wellness visits. During these visits, the baby’s doctor will assess their symptoms and look for problems that are linked to FASDs, NAS, or substance abuse, and develop a treatment plan accordingly.

The laws regarding drug and alcohol use during pregnancy vary from one state to the next. Some states do not have any laws regarding prenatal substance abuse while other states will charge a woman with child endangerment. Many experts argue that laws that penalize new mothers are ineffective because they discourage women from seeking treatment and instead try to conceal their substance abuse.

Barriers to Treatment and Recovery for Pregnant Women

Unfortunately, many pregnant women are hesitant to seek addiction treatment for a variety of reasons, including: 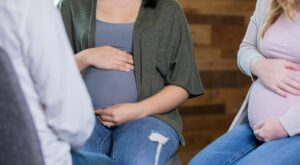 For the health of both mother and baby, addicted pregnant women require comprehensive medical and behavioral support. They must also be treated for co-occurring mental health conditions and provided resources for sober mothers.

Pregnancy comes with a host of specific healthcare needs, such as regular wellness visits, maternity care, proper nutrition, and more. Both inpatient and outpatient rehab centers are available to provide comprehensive medical care for the mother while helping her get sober.

Addiction treatment can be life-saving, especially if you are pregnant. If you or someone you love is experiencing substance abuse and addiction during pregnancy, the time to get help is now. There are understanding, compassionate treatment options available. Call now to speak with an admissions counselor about finding a rehab center that meets your needs.